So today my Peace Corps group had the chance to meet the Governor of our Province where we are doing our Pre-Service Training. Everyone was practicing how to introduce themselves correctly this week because when it’s in Thai it’s no longer as simple as “Hi, My name is….” we aren’t Eminem after all. Our introductions include formally saying our first name, last name, city, state and country and formal ending determined by your gender, in the correct order and tones (since Thai is a tonal language one tone off and you could offend someone).

So we all took our turns and as I see my groups go I feel pride for each one. But most of all I feel pride for the Latinos, here we are so far from our home and culture and we all sympathize with one another and appreciate each other because by speaking Spanish we can bring ourselves home if only for a moment. Each of us went, sounding slightly off because transitioning from Thai to Spanish is quite the feat, but as Ortega, Santos, and Puentes speak I feel a sense of unity and knowing that we have each other in this. We may struggle learning Thai but we’ve all been through this before, some learning English, others with Spanish, but we all rejoice in knowing at the end of this we will be poly lingual.

Why is the Latino Pride so important? I feel Latino pride so heavily that I’ve even been accused of self segregation. The truth of the matter is whether it be intentional or not there is a certain behavior and mannerisms that can be observed in each racial group. White Americans (from my observations), tend to put a happy face on and appear friendly with every group, but they are the ones that are just as quick to turn and gossip about you. While in some cases Americans are seen as direct, they’re not. With that said most every time I spend time with White Americans I find myself confused as they both insult and compliment one another. However, with Latinos what you see is what you get, that is especially true with Latinas, we are queens of giving honest, rough truths. We are queens of observing, and giving our opinions and moreover we are queens of saying our truths in the most clever way. Does this make us many friends? No. Do we care? Not really. But the friends we do have stick with us through thick and thin. Do all of these instances stand true? Not really, but based on my observations it’s what I believe. I have had white friends that mean the world to me, but I have also had Latino friends that I can’t stand. So with that said, it’s not always a “race thing” it’s a this is who I choose to associate myself with thing.

Why did you join? Was it to better yourself? Or better a community? Well yes and yes. Travel has always been a fantastic way to better yourself, and when you return you have stories that inspire and fascinate. Through some of these stories you encourage others to travel and the chain begins, each traveler shares their story and from that everyone benefits and everyone learns. Bettering the community? I can only hope I affect the whole community where I am stationed but I imagine that it will end up being one person or a small group that I inspire and that most certainly will be enough. I joined so that I could see through new and refreshed eyes, for though I love my home, both Pennsylvania and Puerto Rico, life was hitting a standstill and becoming routine. May I never go back to being the bitter bartender closing one restaurant and opening the other the next day. May I never be the server having to force out laughs, or repeating the same question 150 times a day, “Black beans or refried?” May the next time that I hear mariachi music be on the shore in Mexico, and god forbid I sing another franchise happy birthday song. When times are rough, and they will be. Think of the anticipation you had before coming to Thailand. Think of how you anxiously counted down the days before you left and eagerly stashed away the money hoping to eat every Thai dish imaginable. Think of how proud your family is and will be when you complete your service. Think of the next journey, but remember to enjoy the day. Count your blessings for they are so obviously in front of you and remember, it may be a bad day, but it’s a bad day in Thailand.

Miami fully represents the idea of life in color. Bright hotels paint the streets, flashy cars don the road like jewelry, sparkling lights and palm trees dress every corner. The people were (for lack of a better word) pretty, it can only be described as walking into the pages of a fashion magazine. If your searching for a land characterized by glamour, you would benefit from booking a one-way ticket to this trendy vacation spot. Despite the excitement, the lights, the beat of the club music reverberating through your bones, the pulse of the city lies in the most unsuspecting of places.

Place No. 1: The Front Row Seat of a City Bike

“Let’s rent bikes” she said. It was 90 degrees outside when this horrendous statement was uttered. I was about to sarcastically respond with a firm “no” but when I saw Shannon’s face, I realized she was serious. I begrudgingly went along with this plan. After three credit card swipes, numerous failed attempts at dislodging the bikes from their ports, and help from amused bystanders, we were finally riding in style on our city bikes. We decided to ride up and down ocean drive on a winding path. To our left, we saw the glowing row of restaurants, hotels, and shops. To our right, we were graced with a beautiful view of ocean for which this drive was named after. At times, it was impossible to decided where to look first. The wind, which was nonexistent when walking, suddenly swirled all around us as we weaved between throngs of people. Of course, there was some racing (when is the last time you raced someone on a bike?) and occasionally, I lagged behind (you would too if you couldn’t decide what to look at).
It gets better though, as we were riding the sun was going down, staining the sky with so many different colors. As the sky went dark, the street lamps came on and the ocean became a distant roar. By the time we returned the bikes, we were sticky, out of breath, and filled with newfound freedom. The crazy thing about this experience is that it left my heart feeling so full and light. Talk about a juxtaposition. I promise you that this is a feeling you all need to chase down, no matter what. I’m recommending you try a bike. 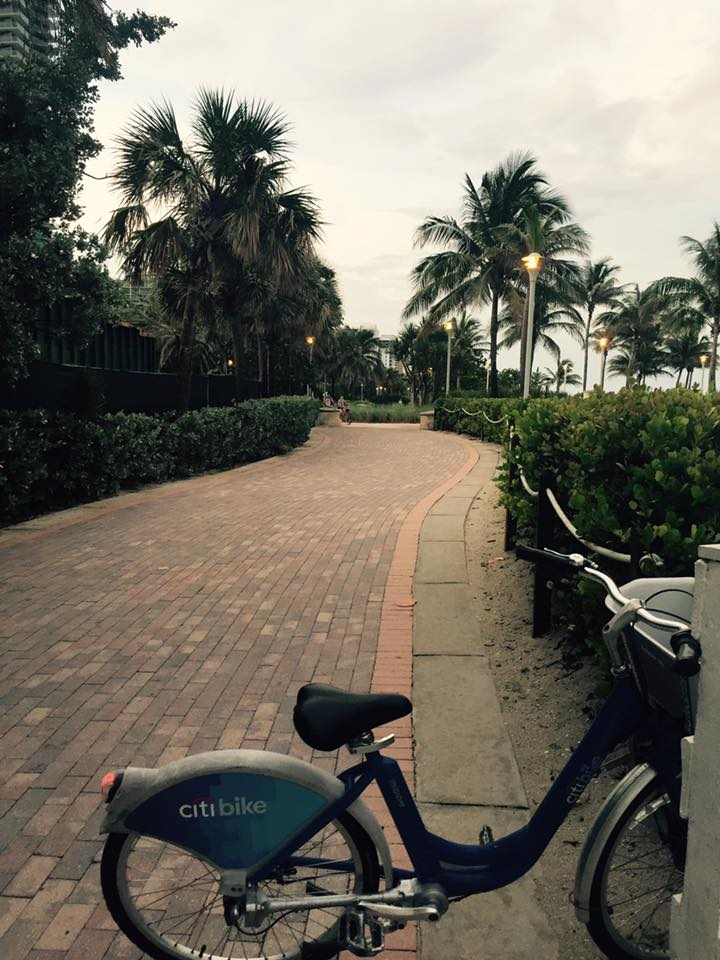